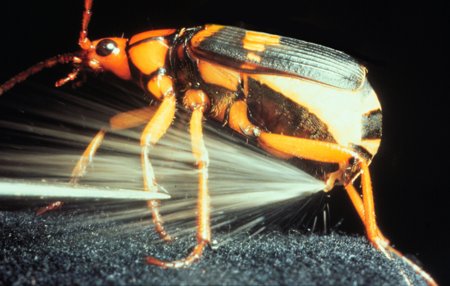 Bombardier beetle (Pheropsophus verticalis) discharging quinones at 100°C!
Many insects have evolved the use of chemical defenses, but none utilize them as explosively or at such high temperatures as Bombardier beetles (Eisner, Eisner & Siegler 2005). When provoked by predators such as ants, spiders or even vertebrates, Bombardier beetles mix together hydrogen peroxide, hydroquinones, peroxidase and catalase within their abdomen to cause an explosion. This explosion has an audible 'pop' as a spray of oxygen, steam and irritating quinones is expelled at 100°C (Armitage & Mullisen 2003).

There are more than 500 known species of Bombardier beetles which belong to the family Carabidae (ground dwelling beetles) and are from multiple genera belonging to the four tribes Brachinini, Metriini, Ozaenini and Paussini. The Brachinus genus is the most widely distributed. Despite having over 2/3 of the known Coleopteran families, Australia however only has one species of Bombardier beetle- Pheropsophus verticalis (Commonwealth Scientific and Industrial Research Organisation [CSIRO] 1991). They are found in habitats such as forests, plains and deserts all over the world. During the day they tend to group together with members of their own species under rocks and pebbles and usually near a water source. At night however, they are generally active predators (Eisner, Eisner & Siegler 2005; Armitage & Mullisen 2003).